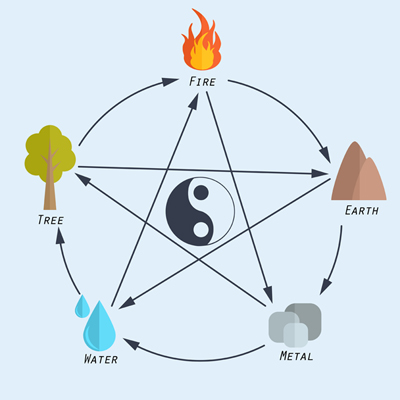 The 5 elements theory relates to almost anything in Chinese culture. For example; acupressure, acupuncture, The practice of Bah Gua, Tai Chi and The Daoist Chinese philosophy to name a few.

The 5 elements can also be looked at as the 5 phases or the 5 cycles.

Another way of calling them is the Creation cycle.

One gives into the other. They are used to describe relationships between everything that happens around us and within our bodies.

There are 4 cycles that are interwoven within the Creation cycle:

The Generating cycle is also called the Sheng cycle. It is associated with the nourishment and support that a child receives from the mother.

In this part of the cycle one element prevents another element from overpowering the other. An image could be like the strict grandmother who doesn’t allow her grandchild to do whatever s/he wants. This is called tough love.  It is the ‘checks and balances’ cycle.

These two cycles together represent balance and a healthy version of the 5 elements.

But it doesn’t end here.

This is when there is an imbalance within the Control cycle. If the Grandmother element gets too controlling where she damages the grandchild element rather than beneficially controlling.

The Insulting cycle also known as the Wu cycle

A good example of this would be when the earth along the river bank that channels the river is washed away by the river. The attempt of the earth to control the river is defied by the water overpowering the earth and washing it away.

The Overacting and Insulting cycles are the imbalanced and disharmonious cycles of the 5 elements system.

Our goal in the 5 element philosophy is to use these last two cycles to help diagnose problems so as to heal them and bring back harmony through acupuncture, Qigong or other healing methods.

There is always an elemental dance of creation and destruction but the goal is to always find balance and harmony between the two.