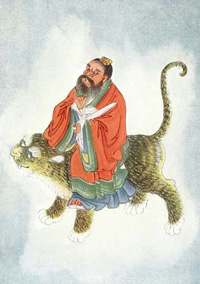 The Beginning of a Structured Daoist Faith

We already know that Taoism, (Daoism), is a Chinese philosophy that speaks about living simply, honestly, and in harmony with nature. However, but we don’t know when Taoism actually originated. Most Taoists say a man named Lao-tzu, (Laozi), was the first to receive the inspiration of the Dao. Not many scholars agree on when he lived and some assert he wasn't a real man.

Chang Tao Ling, ((Zhang Daoling) often just referred to as Chang Ling, (Zhang Ling) was a hermit who lived during the Han dynasty is usually credited with formalizing the first organized Taoist sect sometime around 142 CE in the 2nd century.

A Healer and an Exorcist

Chang Ling came from a poor family and renounced all traditional learning in the search of immortality. He renounced his family and friends and became a hermit to practice meditation and alchemist practices. In his quest for immortality he lived on holy mountains and is said to have developed magical abilities and was a healer and an exorcist.

A Message from the Dive old master

Despite being a hermit it was said that he had personal charisma along with spiritual abilities that offered him a warm welcome among the residents of Sichuan. There during one of his visits he allegedly received a revelation from the Laozi who gave him a plan to create a theocratic state with a catalogue of religious practices in a divinely revealed scripture. He also received divine healing powers, magical and spiritual tools to combat evil and even a demon vanquishing sword. After this event, he and a group of landowners who he healed himself went into the mountains and established the theocratic state.

A Religion Based on the Writings of Laozi

Laozi also informed him that the present social order was coming to an end and there would follow an era of Great Peace. He urged Chang ling to establish a judicial and moral kingdom to bring in and manage this benevolent era. To propagate his movement he wrote the commentary to the Daodejing (Tao Te Ching) called the Xiang’er, the earliest surviving texts known today.

A Religion Based on the Principles of Health and Longevity

This new religion emphasized the connection between sin and suffering. Chang Ling introduced repentance and healing ceremonies He taught that illness was the result of sinful mindedness and could be cured by making a confession to a priest and this purification brought back physical health. This faith healing method made the movement attractive to the common people. This health cult promoted certain longevity practices and founded a theocratic state in Sichuan. They also rejected food and animal sacrifices where everyone paid 5 pecks of rice – hence the name for the sect. It is assumed that he used these payments for the poorer members of the sect. Part of the mission of the Heavenly Masters was to supply food and shelter for the needy of their day. They did not stray from the original concept of the Tao or harmony with nature believing that benevolence and kindness led to harmony,

A Celestial Master that Influenced China until Present Day

When he died, it was said that he disappeared into the sky and only left his clothing. He continues to be revered the Celestial Master until present day. And his descendants have held the title of Celestial masters up to present day. Chang Lu (Chang Lings grandson) held a revolt against Confucius leaders and created an independent land under the rule of Taoism called Han Chung. It didn’t last very long but it did prove the power of the heavenly masters in China and the proof of the success of Chang Ling and his descendants in developing Taoism into a form system of faith that would spread all over china by the 4th Century CE.

Image: Zhuang Ling was said to ride on a tiger